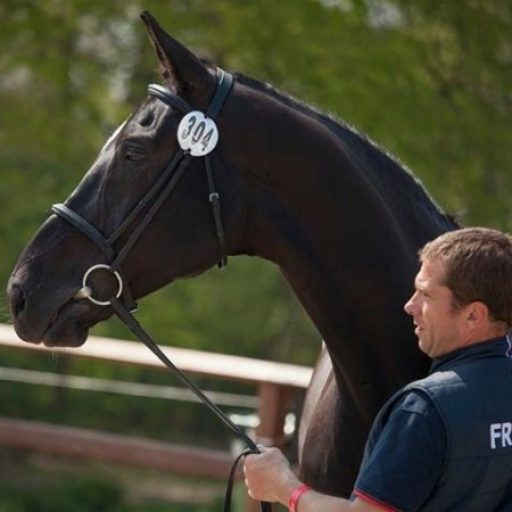 Born in Saint-Quentin (02) on January 24, 1974, nothing predestined me to become a rider of the French team of dressage handisport ….

I start riding at the age of 8 with pony lessons. At the age of 15, I return to learning lad-jockey and my professional jockey career starts.

On September 1st, 1994, I had a car accident the day after a victory of a big horse race in Belgium. The diagnosis is irrevocable: I must be amputated from my right leg.

After months of rehabilitation, I have to relearn how to walk, to adapt to my prosthesis. But the urge to go back on horse is still very present. I overcome my handicap and thanks to my practice, i acquire the strength to fight and make my life memorable and unforgettable.

November 2017 : Champion of FRANCE at ST LÔ with Tarantino Fleuri.

September – October 2017 : Resumption of work slowly for Tarantino Fleuri after more than a year of convalescence

May 2017 : Not ranked at the CPEDI of ROOSENDAAL (NED) with Richardz du loing

April 2017: Not classified at the CPEDI of WAREGEM (BEL) and DEAUVILLE (FRA) with Richardz du loing

June 2015 : Champion of FRANCE at ST LÔ with Tarentino Fleuri.